My name is Lena Insulander and I live with my husband, Lucas, and our daughter, Linda, in the country, about 20 minutes from the city of Eskilstuna which is about 10 Swedish miles West of our capital, Stockholm. At the moment we have three dogs at home; Ina and two of her offspring. In the house lives two cats as well.

I bought my first borzoi in 1981 and her name was Ermolaij's Fanya Feron. When she was 2 years old I acquired my second borzoi; Ermolaij's Kyra Tamara. When the ladies got old, I got my third borzoi; a male named Ivegill's Lord Moonwalk, called Gorby.

I had to put Fanya to sleep at the age of 12 and Tamara the year after that (she became 11) and so I had only one borzoi.

In the summer of 1995 I fell in love with a Norwegian bitch that I met at Skokloster. I talked to the owner, and fortunately they had recently talked about selling her because they planned to have a litter from her sister. What luck!  In the pedigree I could see that she had the same bloodlines that my first borzoi, Fanya. Maybe that's why I felt in love with Nadja at the first sight!

In the fall 1995 we went to Norway to bring home my 4th borzoi, Ch Nor-Castle's Nadesjda.

Nadesjda, “Nadja”,  became our foundation bitch. She whelped our first litter in July 1997. Unfortunately, I was only able to have one litter from her since we, at that time, did not have kennel facilities. We did have one bitch at home from that litter, Barowiak's Anna Pavlova (Fanny). She is the mother to our B-litter and from that litter we kept two  puppies at home. B. Bronislava Nijinska (Betty) became the dame to our C-litter. From the C-litter we have B.Chagall and B. Chatara at home. 2012 Chatara became mother of our D-litter from which we kept B. Dronina Ballerina (Ina). Ina became mother to our E-litter 2016. From that litter we have two females at home, B. Evgeniya Lukina (Dimma) and B. Extris Black Molly (Molly). Molly became mother recently to four puppies.

I have trained obedience (more or less) with all my dogs. Fanya, my first dog, I trained and competed to the highest class. Fanya did only compete in Class I (at that time it was Class I, II and III) at official competitions. She received an obedience-diploma (LP title for three first prizes). Tamara I trained to Class II, but never entered into any official competitions. When I bought Gorby I started to train him at once. He gained his LP quite easily. My goal with him was that he should compete in Class III, maybe higher and become obedience champion, but we only came to class II because of Linda’s birth and the puppies. Unfortunately, I didn't have the time to train him as much as I needed. He was trained up to Class III.

Gorby crossed the Rainbow Bridge in the summer of 2005. He became 12 years, 2 months and 1 day old. He's the one that I'm going to miss most of them all - he was my Favourite of Favourites.

Nadja was not interested in obedience but she was marvellous at tracking (which I have found, all borzois are).

Due to my interest in obedience I trained to become an instructor, which I have been since 1989.

Because of lack of time I don't train so much obedience nowadays but we do some game/blood tracking instead and they really like it (and it's so easy...).

Recently we discovered lure coursing, where Dimma has taken licens, so we will probably be seen on the LC-tracks (as well as in show rings) sometimes.

Of course we attend some shows as well :)

Check the links  "Our dogs" and "Past dogs" to see pictures and read more about our beloved dogs! 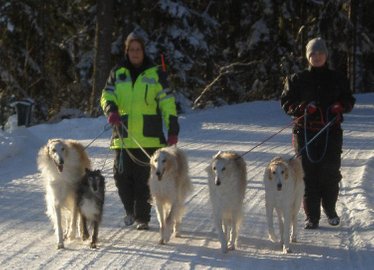 1993: I bought LP Ivegill's Lord Moonwalk - the one that I mostly trained in obedince

1997: I registered the kennel name Barowiak's and at the same time we got our first litter - the A-litter

It took me 16 years and four dogs before I got my first litter and as you can see I don't produce in a big scale - I try to produce quality instead of quantity...and most important GOOD TEMPERAMENT and HEALTHY DOGS